So today is Friday, May 29th. It is 9:45pm as I write this. This means that I have 9 hours left in London before I have to leave to head to the airport. I cannot believe I just burned through 4 months. Where did the time go, seriously? I realize that I have had some amazing experiences but I have this weird feeling like tomorrow I am not going to leave. Tomorrow feels like it is ju 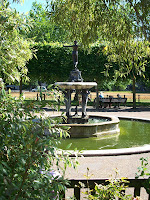 st another weekend trip and I will be back here Monday morning. Do you ever get that? While I love all the people back home (there's no easy way to say this without offending people) but I don't want to go home. Going home means this semester has come to end, that it is officially over. That starting Monday I have to head back to my summer job. That this summer has begun and thus starts the count down until the end of college and furthermore the closure on a stage of my life. It bums me out to be honest. Peter Pan was right, growing up isn't fun and why would you want to?
Alrighty now that I have turned this into a cheesy editorial I will move on.
This past week I have been trying to do the last couple of things on my to-do list and revisit some of my favorite places. Yesterday I went to the Natural History Museum and the Science Museum. I had been to neither of these and they sounded like fun. The Natural History Museum was cool but just another extention of 3rd grade soci 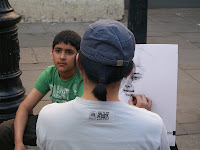 al studies. It contained information that I had already learned a million times over so I stuck to looking at the displays instead. IT had all kinds of displays: minerals, fossils, animals, and bunch of other things. I thought most of the displays were cool-the dinosaur stuff being my favorite. They had an actualy dinosaur only exhibit but the queue was rather long so I opted not to go in. The museum had animal which was more like walking through a zoo but with specimens with empty souls. There were tons of taxidermed animals. While a child would love this I actually found it quite sad. Just the fact that these were dead animals stuffed and put on display--i don't know, it just made me sad. I think it is the fact that my mother is an animal lover and that growing up in my household was like being a part of dr. dolittle's world that I felt this way. Seeing the staple stitches on the giraffe's stomach where they inserted the foam and stuffing is wha 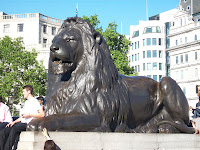 t did me in. This bummed me out a bit so I decided it was time to go. I had been there close to 2 hours and saw what I wanted to. Then I went to the Sciene Museum-thinking it would be a larger version of Robot World in the Dells. But it wasn't it had some early models of inventions likehe printing press, a loom, early automotives and space shuttles. But other than that there wasn't much so it was a bit of a let down but still cool.
This morning Dani Sam and I went to have our last meal in London. We woke up and went and had full-english breakfast. Delicious, as always and I am definitely going to miss it. I didn't really fell like going to anopther museum so Dani and I opted for going to Hyde P ark and laying around there for a while. It was a gorgeous hot sunny day so I soaked up as much sun as I could. I ended up taking close to a 2 hour nap there as well. After some much needed lounging, Dani and I walked to Buckingham Palace, a few blocks away and then strolled up to the National Gallery. Trafalgar Square was very busy today so we jsut stopped for a second and then head to Leicester Square and Covent Garden (Theatreland). Also so busy so we walked around the block and headed back to Nido.
Here I have been just doing some finishing touches to packing and will prob go to bed soo nsince I have to get up so early and head to Heathrow Airport. I will be back in Chicago tomorrow at 2pm central time. Crazy stuff. Not looking forward to the almost 9 hr. flight. Not fun.
List of things I will miss most from London:
1. My friends from here.
2. Kebabs, Crown Fish, and Tesco (they kept me fed this semester)
3. The parks. (Hyde, Regent, Green, St. James, Highbury)
4. The diversity of people.
5. Walking around and seeing history left and right.
6. The tube
7. Dani talking in her sleep (quite entertaining)
8. Sam turning every word into a plural (Tescos, Convent Gardens)
9. Mike's random catch phrases ("These beans are bomb!")
10. Lady Gaga marathons and the "downstairs"
See you London, you were Amazing!
And see all of you guys soon. Thanks for reading the blog too, made the writing worth it.
:)

Posted by Allison Bauer at 1:44 PM