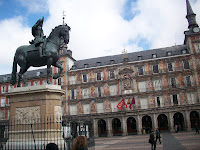 We arrived in Madrid without a hitch. Katie was quite thoughtful and wrote out thorough directions for us in how to get to our hostel. We stayed in Hostel One located in Puerta del Sol, which is the city center. We took the metro which included switching lines a few times but no problem. That is until Mike went rogue and decided to walk off in the opposite direction of needed. I had to go catch him and lead him the right way. Both of us decided that we weren't sure what his train of thought was. Isn't it nice to have a male leader? After having some very minor confusion of which street we wanted, we found the hostel. We made plans to meet Katie at 6:30p which only gave us a few minute 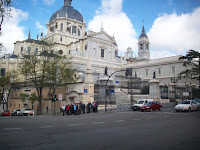 s to rest before we had to go meet her. After waiting for a few minutes, Katie found us and showed us some of the iconic parts of Madrid. This included the eact center of Madrid, the famous Tio Pepe sign, and the Bear and tree statue. These were all in Puerta del Sol. She then took us on a mimi tour and showed us the royal palace and Plaza Mayor. Afterwards, she took us to where she lives. Katie has a host family where she lives with Concha (her host mom), Pablo (Concha's son), Jill (another study abroad student like Katie), and Trufa (the dog, means truffle in Spanish). Concha was the most welcoming, cutest lady. She doesn't know English that well, so I had to use Katie to help me translate when I couldn't think of how to say something. Truffa is a yellow lab and was adorable, made me miss my dog tons. We sat aroundand 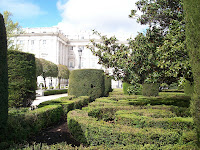 talked for a while, like we hadn't just spent the last 8 days together, or something. Mika and I didn't want to impose on dinner (they eat around 11pm there) so we headed back to the hostel. When we got back, I hopped on the computer and hung out in the tv room. This has been my favorite hostel I have stayed in so far. The bathroom was amazing, beds comfortable, and in the common room they had a flat screen tv with a playstation and a DVD collection. Awesome! So I sat and read Wicked for a little bit and then went to bed. We awoke next morning with plans to meet Katie and Mike's friend, Alyssa at 12:30. We decided to walk around and do some souvenir shopping before we met them, and I was able to get myself an authentic Spanish fan along with some other items for the family. We met up with K 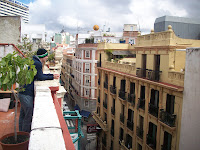 atie and alyssa and headed to lunch at a place I forgot the name of but they have these great little sandwiches called bocadillos. Spain is known for there ham so naturally I had a ham sandwich. I think my favorite was the chorizo ham if I am remembering the name correctly. We then walked arounf for a little and Alyssa took us back to show us her apartment. Katie had to head off and go to a class btu we were going to meet up with her later. Alyssa's apartment was small, but cute. They had a balcony they had a cool view considering it was on the top floor and all. After a while, mike and I headed off and went to this park that had an Egyptian tomb-that was a gift from Egypt as a thank you for Spain restoring it or something of that nature. The park was pretty and it had been cloudy and rainy most of the day and it was finally getting sunny out. From there we walked to Plaza Espana which is where 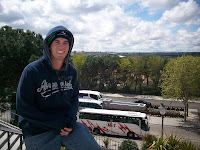 the famous Don Quixote fountain. The is pretty cool and the flowers around it were gorgeous. From there we walk Gran Via, one of the main streets, back to the hostel and bummed around there for a little while. We then went to meet Katie and since Mike and I were hungry we stopped at a cafe that was close by and had dinner. We were having some fun chatting with each other and it even led to another quote from Mike. We were talking about friends and he thought it was cool that Katie and I have been friends since we were 7. He then said how he felt he had known Katie for longer than the realistic week by saying, "I feel that I've known you for so long. Who knows, maybe we were lizards together in a past life." Taken out of context that statement may not be funny but believe me if you wer 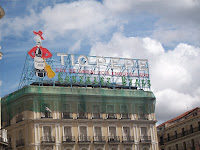 e sitting at that table you wouldn't have been able to keep a straight face. We were at the cafe for about 3 hours or so when Katie had to head home so Mike and I said goodbye and went back to the hostel. We woke up the next day and while Mike slept in again, I bummed around and watched tv and went on the computer. After we checked out, we headed to the airport using the metro. We arrived at the airport too early apparently. This is what I was told after I had been waiting for about 30 min. We had to wait another 40 min. or so and then finally were able to check in. This went pretty smoothly and we made our way to the gate. We were caught off guard when we saw that we had to go through a police check point and have our passports check again. But I got excited because this meant that I finally got my Spain stamp in my passport. I still can't figure out why they give you one when you leave but, I'm not going to complain. At the gate, we ran into Mike's friend Alyssa. She was coming to London the same day and staying for the weekend with Mike. But we thought she was on the plane a 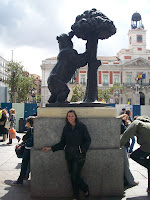 fter ours so it was a surprise to see her. Well, we boarded the flight and off we went. I just started readin Wicked and eventually fell asleep. Apparently at one point Mike tried to talk to me before he saw that I was completely konked out. We arrived at London Stansted Airport around 6pm or so and caught a bus to take us into the city. I was so relieved to arrive to Baker Street and know exactly where I was. Love it. Well that ends my crazy 10 day extravaganza. It was a ton of fun and I was so glad that everyone got along so well. And while, Mike may not have been able to make his own bed, read a map, plug in a heater he sure made the trip a lot funnier. Plus Katie and Alyssa are two of my best friends from home, so I can easily say this was the best spring break ever.
Posted by Allison Bauer at 7:52 AM