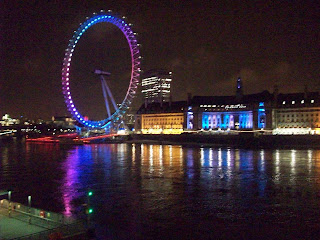 So I haven't done one of these in week. Yes, I am being a slacker.
Partially is because I ahvent done anything terribly exciting this week. I had class monday and tuesday....officially becoming my biggest waste of time.
Thursday the girls and I went out for dinner at a restaurant in Covent Garden (theatreland). I had salmon with rosemay and garlic potatoes and holladaise sauce; along with some raspberry and apple cake as dessert. Delicious! I don't usually get real food here just noodles and turkey sandwiches so this was a real treat. Afterwards we came back to NIDO but Sam and I wanted to go walk around. I was a really nice day here and London at night is gorgeous. We 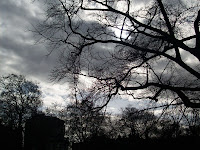 went down to the Thames Rover next to Parliament walked around for a while, got lost, and came back home. Early friday morning, Anthony, Dani's boyfriend, was arriving. It is his spring break so he is staying here for a week and then to the two of them are going to Amsterdam this weekend.
So, I got bored and decided to go down to oxford circus and did a little shopping. It was nothing special I just bought a couple of shirts and a necklace--and it was all under 9 pounds!
Saturday was gorgeous out! So I visited Hyde Park again. What can I say, I 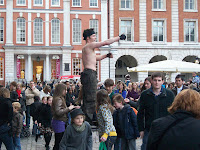 love that place. this time I explored a different part of it and watched a group of guys play football (soccer) for a while. I sat and read too, well, until it got a bit chilly and a couple with a baby came by and kept eyeing up my spot. HA. Afterwards I went up to Trafalger Spuare and walked around there for a little while. There was a celebration going on, but the commentaters were speaking in a language from the middle east, so I have no idea what it was for. After there I walked up to Holborn and came home. Sunday was a lazy day. We woke up early to go to the parade in Trafalgar Square for St. Patrick's Day. The parade was fun but nothing compared to those we see back home. They didn't even throw candy...well cans of guiness would have been more appropriate but you get the point. we stayed in the square for a little while. There they had bands playing some fun music. I bought a scarf as a souvenir and it now adorns my wall. But after that I came back to the room and worked on some journals that are due tomorrow. Dani and Anthony went to dinner anda movie so I enjoyed some alone time in the room and watched Darby O Gill and the Lit 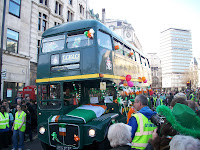 tle People. You probably don't know what that is. It's a movie. Amazing one. Rent it. And later began to watch Watchmen. Today I wasted 2 hours in my literature class and just spent 3 pounds to print off 10 pages at the local internet cafe. They are pretty steep in prices for that here....I miss being able to do it at my university for free.
Posted by Allison Bauer at 6:00 AM