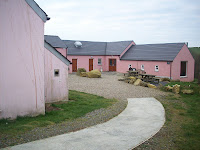 Well have I got some stories for you!
Friday was quite a doozy. We had a coach bus to take us to Wales, set to depart at noon. So we decided to meet in the lobby at 11:10/ 11:15ish which would give us plenty of time to get there. To my joy, not, when I showed up in the lobby with Dani, this other girl Alison had forgotten something and had to run back up to the room. So we waited for her and then headed off. We got down the steps outside my building when Alison once again noticed she forgot something, this time her allergy medication. I don't know if she had to chemically make the pills or what not herself but she sure took her sweet time to get 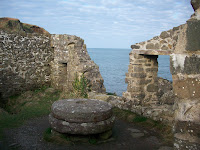 it. As we were waiting, my friend Jack came back from his 11 o clock class. He originally was going to meet us at the station because we didn't know how late his class would get out. So we waited for him because he just had to run up and get his bags. All of this waiting put us about 10/ 15 min. behind schedule. So we jaunted to the tube station to hop a train down to the coach station. Just my luck the tube broke down when we were 1, I repeat 1, stop away from the coach. I was attempting to stay calm but inside I was completely nervous about missing our bus. Where the tube stopped was about a 15 min. walk and it was about 11:45/ 11:50 at this point. So we then made the judgement call to try and catch a bus over to the 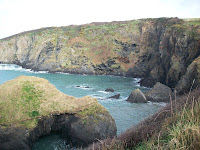 station. Luckily we didn't have to wait long. We hopped on the bus and headed over. As soon as the bus got us as close as possible we literally ran off the bus and down the street. It was like Home Alone when the family is running through the airport to catch their plane. Choas and I am sure we were quite the sight for onlookers. So we are running like mad men to get there. When we get to the station we look up on the terminal board to see where our bus was at and...our destination (Haverfordwest, Wales) wasn't up there. The bus had left. Multiple curse words ran through my mind.
The only other choice to get to Wales was to take a train. So we hopped back on the tube (different line) and 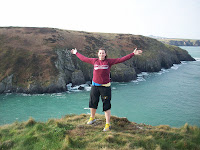 went to Paddington station to catch a train. When we got to the ticket office they informed us that with a group rate (of 4 ppl.) it would be 44 pounds ($63) to take a one-way train to Wales. Yeah, my thoughts exactly; not the greatest amount I have ever been told. But we had no choice. So we got on that which got us to Wales on time.
So Friday night we headed to the lodge and had dinner. We could actually see stars! It was amazing! Being in the middle of Wales reminded me of being back home, Wisconsin. What a lovely way to be welcomed to the country. Upon arrival we were situated and assigned rooms. Very lovely decor. Another plus was the fact that dinner was served almost immediately. After dinner Libby, the activities coordinator, gave us some info about the weekend and we just relaxed and played some intense games of jenga and balderdash. What an amazing forst night.
Saturday morning we ate breakfast and then headed off for a 7 mile coastal hike. I have never been to Wales, or the UK for that matter, and was extremely excited for this hike. They drove us to a drop off point and we basically had to find our way back to the lodge. It was gorg 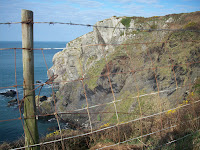 eous, i have never seen anything like it. The ocean was a blue that one could only stare at. The cliffs were bright and each rich color pratically glowed in the sun. The best part is when my group and I took a wrong turn near the end that sent us off in the complete opposite direction of the lodge. Luckily the map they provided help us find our way home. Each person felt that they could set us on the right path and it became funny how none of us had any sense of direction. After walking down some roads and stopping a driver we arrived to the lodge about 30/45 min later than expected but we did fine.
Saturday afternoon we got all geared up to go coasteering. Coasteering is kind of hard to describe but in essence: you head to the coast, climb down to the water, jump in, swim to another cliff, jump off it, and head to the next cliff to do it again. Gettind dressed for coasteering is half the fun, really. Firts you must get geared up head to toe in a winter wet suit, life vest, helmet, booties and gloves. We all felt and looked like some odd gang of superhereos! The first thing we did was go into a little alcove where we bobbed in the water while the tide brought us up and down like an elevator, it was really cool. My friend Dani has a fear of drowning and elevators so this brought o 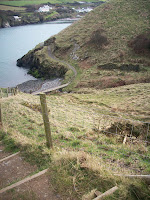 ut those fears in her. The look on her face was priceless and wuite comical; her eyes all bugged out and mouth opened wide. We then headed to the cliffs to do some jumping. And this was incredible, I had never done anything like it before. My fear of heights came up here and there but after I relaxed and got into it I was having a blast. What an adrenaline rush and I felt like Evil Knievel! We ended the session with a jump off of a 30ft cliff too. It took me a little longer to take the leap but I did it and would do it again. This was my favorite activity of the weekend. It was at about this point that I fell in love with Wales. Words can describe my fondness for this place.
Saturday night was spent hanging out by the bonfire the lodge built for us. This weekend, a couple from New Zealand, living in London, was there as well. So it was nice to talk with and meet them . They were celebrating there 1 year wedding anniversary, and were completely adorable. Oh, and there children will be gorgeous by the looks of it.
Sunday we had one last session. Kayaking. I had never kayaked before, only canoed, so I was bit nervous, because I don't always have the best balance. But it was fine. They taught us some techniques and how to get out of the kayak quickly in case of emergency--littl 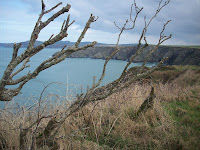 e did I know I would need to use the latter later. We started of with a fun game of polo; my team won! It really was a test of balance to play the game. My friend Dani actually tipped herself over but no worries she was completely fine and we were still close to shore so she practically just hopped back in. We then went off and explored some caves and played around with the rocks. After a couple of hours, and 3 people tipping over there kayaks, the instructors (all two of them--very friendly and professional) found these two smaller rocks that we would be able to ride waves through. They showed us and it looked fun so I thought I'd give it a go. My first run through was quite fun so I wanted to go again. Cue the scary music. My second time around the instructor asked, "Do you want a bigger wave than last time?" and I, like and idiot said, "Yes!" So as I was riding the wave through when it 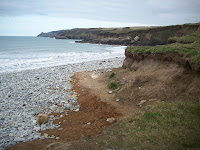 crashed me against one of the rocks and pinned me on my side. I was trying to sit myself upright when a second wave crashed into me and tipped me over. I was a bit stuck but was able to wiggle out of my kayak. At this point, I was kind weirded out and trying to get my barrings but the instructors had already rushed over, got my kayak and paddle and were helping me out. They really were amazing and helped me feel completely safe. It took some effort but I got back in the kayak--which is a bit harder to do in the middle of the water where you can't touch the ground for leverage and you have to get back in feet first. But I got back in and the instructors decided to call it a day, it was near the end anyway. It wasn't til I was bring my kayak up on shore that I noticed how bad my hands got cut up and were now bleeding. The barnacles on the rocks are rather sharp and while I was holding the rocks to get myself upright they must have cut me up a little bit. After changing out of the wetsuit and some minor first aid. I was okay, but now hands look kinda like I tried to played rugby with a cheese grader. But I am fine just having troubles holding things...Oh, well makes f 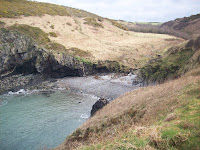 or a better story, eh?
So after we got back and showered we ate lunch and hung around the lodge until it was time for them to take us back to the bus station. Where I actually made the bus to come home and seven and half hours later I was on the tube line that had broke down on Friday. Don't you just love when things come full circle? My Wales filled weekend was one of the best weekends of my life. I am already figuring out a way I can return and have more adventures. Amazing place. Oh and all of these pics are from my hike, I haven't developed my water-proof camera from coasteering and kayaking yet...those will come later.
Posted by Allison Bauer at 6:43 AM