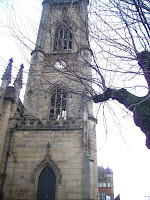 Yes mom, I know it's been a few days...
Well this weekend I went to Liverpool with Dani, Greg, and Andrew. Typically there are 2 reasons to visit this city. One, they have their own football team and two, it's where the Beatles are from. We went there for the latter. The trip started off with catching a coach bus at 8 am on friday. It was about a 5 hour trip but I attempted to sleep on the bus, but wasn't very successful--I was too distracted by the scenery we passed on the way. When we arrived we had no barrings to where we 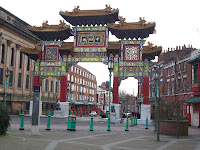 were and where the hostel was. A man approached us to take a taxi, and usually I do not pay attention when I get accosted by people on the street, but this was not London, and he was actually a nice guy trying to help. When we found out the taxi would only cost 6 pounds which then got split between the four of us, we decided it was a good idea. We had a very nice driver who pointed out hotspots and what to do/ not do while we were here. We arrived at the hostel and settled in for a bit. We then headed out to walk around the city. Here we saw some great graffitti art, churches, and Chinatown. While we were journeying around we saw the Liverpool Cathedral. It is the largest in the UK, and by the look 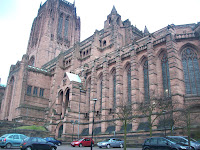 s of it; no one would debate that fact. It was too late in the day to look around inside so we strolled around the exterior. while we were here we came across St. James' Garden. It looked gorgeous and I knew I had to go and walk through it. The grass was lush and green but juxtaposed with gravestones lined allong the walls of it. It created this very creepy, yet cool, atmosphere. After heading through there and taking boat loads of pictures, we starte 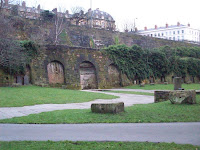 d to walk back to the hostel. It was a great walk that helped me get orientated to the city. After our mini break at the hostel, we went and headed out to get some food and hang out at some pubs. After getting some pizza, we went to Matthew St., which is a hot spot in the city for night life. While here we went to The Lennon Pub which was a karaoke bar filled with people at least 10-15 years older than us. Yep, we stood out but I had a blast hearing some famous songs being belted out in the wrong key. While leaving Dani and I had an encounter with some locals that were old enough to be our grandparents. Thi 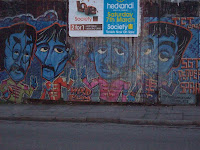 s old man gave me compliment after compliment in a very awkward way; may favorite being that, "the thing about you American girls is that you always have nice teeth." This man also didn't believe in a personal bubble, to the point where I thought he was going to try and kiss me and with no help from the boys (eh hem) Dani and I were able to make it away in one piece. From there, we went to the famous Cavern Club, which is where the Beatles got there start. It is a really cool place and I can see why loads of people flock there to hang out. I have never seen Greg's smile as big a 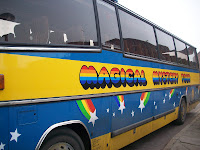 s it was here. After there we went to O'Neil's, an irish club. And might I say the best place to go on the weekend. We instantly became dancing fools when they kept playing some great tunes from our childhood. Here is where we met/ danced with the odd old man that was dressed in a stereotypical german beer garden ensemble thing...anyway he was a lot of fun and never spoke a word. So after we had been dancing for 3 hrs. straight (yes, i know many of you will be surprised by this but it was an amazing place-you would've too) we headed home. We then woke ourse 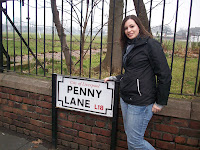 lves up bright and early to head to 8am breakfast that was provided by the hostel. It was a traditional english breakfast that was delicious and we were able to eat enough to tie us over for a while and really cut down on the cost of food. This started off, what would be a day packed with the Beatles. We booked the last four seats for the 12 o'clock Magical Mystery Tour! It was an amazing tour that lasted about 2 hrs. It took us all around Liverpool where we got to see all of their homes, Penny Lane, Strawberry Fields, and the Cavern Club. It was a great tour and I would definitely go on it again. Afterwards we went to The Beatles 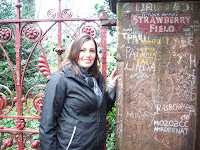 Story which is a museum put together to tell you all about the history of the band. They even had a special exhibit, "The faces of John Lennon." It was a great collection of photographs but really sad at the same time. I learned so much that I didn't know before and am now an even bigger fan of the group. John Lennon is truelly an inspring human being, same with all of them really. Unfortunately no pictures were allowed inside so I can't show you how great this place was. I loved the yellow submarine room so much that I snuck a picture of it-you would've too. 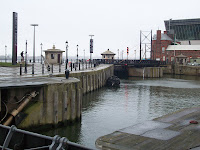 After this we took another break and headed back to the hostel for a nap. Then we decided to go out for some night life again where we revisted The Lennon bar and O'Neils and tried out some new places. It was a pretty crazy day, def. my favorite Valentine's Day so far. Andrew even bought these little plastic roses for Dani and I from a person in the street, it was really cute. This rounded up the even and we wandered home. Then on our last day we woke up and had to check out of the hos 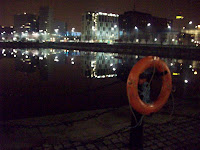 tel by 10 am, so we did that and the hostel held our baggage for us, for the rest of the day--which was very nice of them. Then we went to the Ta 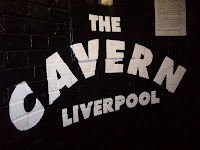 te Liverpool art gallery which had some amazing works from Picasso, Jackson Pollack, Andy Warhol and many more. It was very exciting we then went to grab some lunch. We stopped at this cafe/ pub called The Beehive where I ate some fish and chips. It was delicious and I think the best I have had so far. When then had a little time so we went to the Maritime Museum where they had all of the fun facts about cruiselines and ships. Probably the most famous is the Titanic. Which did you know that left out of Liverpool? I didn't and easily got absorbed in the displays there. Before we knew it we ran out of time and had to head back to the hostel to get o 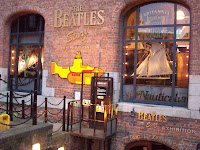 ut stuff. We then called a cab which took us the the bus station and we headed back to London. The bus smelled of a bowl of corn flakes on the way home, and that may sound really weird but I liked it. It reminded me of home in a odd, comforting way. Then when we got back to the city, I was so happy. It's weird how much I missed being away from London, I guess have already become attached to this place. Overall, it was a great trip and I would definitely go back and share it with others...thanks for reading, I know this was a long one. Enjoy the pictures. :) 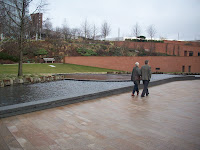 Posted by Allison Bauer at 2:15 PM