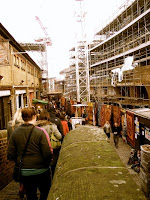 Alrighty.
Well Saturday we decided not to do a typical touristy thing and went down to Camden Market. It was this great little neighborhood with tons of shops and vendors. We stepped out of the station and it was easily the most crowded station i have been to yet. The street was filled with people walking up and down looking at the little shops. This area is the trendy, punk-goth, vintage area. Which made for some interesting people. On the main drag you had all these goth kids with piercings and tattoos. So we walked down a ways to try and get off the beaten path and found a few side streets that were a real english market.

It had brick walkways still and too many soips squeezed into one area. After a little bit we spotted this shop that all of these amazing leatherbound journals, sketchbooks and diaries. I bought a sketchbook that is amazing--it was hand made in India and the paper is hand made...there are still leaf particles in the pages. We moved along and saw that there is still this great little canal that runs through part of it and had a brick bridge over it. It was a gorgeous sight. I didn't really want to leave but it was cold. So we headed home

and took a break and then decided to go out to Soho and find a bar. the one that we had originally planned on going to was packed and there was a line 'til the end of the block so we decided to go to this place called Thirst. Then we headed home and some other went to a local pub but I was way too tired for this and hit the hay.
Sunday we went down to Leicester Square to take part in the celebrations for Chinese New Year. This was amazing as well. They had live performances of singing, dancing, and drum playing (my favorite). They had some little shops set up where they were selling little souveniers....I ended up buying a paper dragon and an ornament with an

ox on it...it was holding a fish that apprently is a symbol to bring money--quite appropriate for this trip, I thought. They had a fireworks display at 6 o' clock. These were gorgeous and I was almost certain that they would set the square on fire. I guess the British don't worry about setting fireworks off in the middle of some trees. After these, we headed home and spent the night bumming around Nido. At about 11ish here is when they were airing the Superbowl so a bunch of us squeezed into the cafe to watch. I stayed up until half time and then had to get some sleep.
Posted by Allison Bauer at 3:40 AM